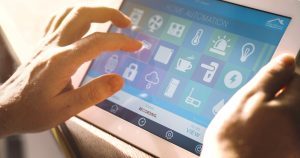 Acting as a dementia caregiver can be a tricky business, especially when your loved one wants to live on their own and you have concerns about their safety. Luckily, advancements in technology mean people with dementia can live independently longer.

One promising technology is smart sensors, which have the potential to revolutionize dementia care once we figure out how to use them in the most effective way, according to Ottawa-based expert Dr. Frank Knoefel.

How Smart Sensors Can Help People With Dementia

Before we delve into some of the finer aspects of sensors, here are the basics. Broadly speaking, smart sensors fall under the umbrella of the Internet of Things (IoT), which consists of devices that are connected to the internet and share data. In a smart home, sensors are seamlessly embedded into the environment, collecting and processing data as people go about their daily activities.

The data that sensors collect can be instantly analyzed using algorithms to detect and report signs of problems to caregivers and others before they become serious. In other words, these sensors allow caregivers to keep tabs on their loved one from afar.

Some smart sensors can even identify the progression of dementia by identifying patterns of use and movement. Once a behavior pattern is learned, any behavior out of the ordinary could then be detected, investigated and reported on. For example, a smart coffee maker could alert caregivers if a loved one deviates from their regular coffee-making routine, (e.g., they forget to use the coffee filter).

There are a plethora of smart home devices to choose from on the marketplace. In addition to a smart coffee maker, you can buy a smart stove that automatically shuts off when the kitchen is empty. You can also find sensors that control climate; detect fire, flooding or smoke; and check carbon dioxide or carbon monoxide levels. In addition, motion sensors can automatically turn on lights to help prevent falls, while entry point sensors can discern whether a door or window has been opened.

Some interesting smart sensor research is taking place in Canada. For instance, in Toronto, a team at the Toronto Rehabilitation Institute is developing a talking bathroom that detects when people forget to turn off the tap or use soap, then prompts them by voice to take the next appropriate action. Another Toronto team is building a predictive system that uses sensors and other technology to detect subtle biological signs of agitation in people with dementia, which could allow caregivers to calm loved ones before symptoms escalate.

Then, in Ottawa, there’s the Sensors and Analytics for Monitoring Mobility and Memory (SAM3) hub, which happens to be where the aforementioned Dr. Knoefel co-leads sensor research. Launched last fall, this apartment laboratory is embedded with sensors that monitor cognitive impairment and predict what is happening with people’s cognitive abilities, based on their daily activities, their sleep quality and their ability to use everyday objects such as a television remote control.

Putting It All Together

The SAM3hub is an initiative of AGE-WELL, an organization that is looking at “how we design society so that we are ready for this reality, which is coming at us at 100 miles an hour,” says Knoefel. When it comes to society, the issue around smart technology is that “we haven’t figured out how to put it all together,” he says.

On an individual level, caregivers who want to use smart sensors need to decide whether to receive sensor feedback directly or to have it sent to the call center of a bigger system, like an alarm company, says Knoefel.

“The question is: who owns the system, does the family buy the system and then it’s just a closed little loop that works in its own little bubble?… What are you connected to, and then, what’s the action that happens? How do you ensure that a sensor [like a smart thermometer] doesn’t just blink wildly on the window sill, which is not going to help anyone?” he asks. “How do we get it to do something or call someone.”

In and of themselves, smart sensors are just passive devices unless they provide an action that promotes safety or diagnoses a condition or its progression, says Knoefel, who likens sensors to eyes. “If they’re on the table they’re not really good. If they’re in my head connected to my brain, those eyes are really good.”

(This article first appeared on A Place for Mom)