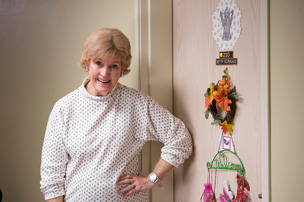 While 90 percent of seniors still want to age in place, even when moving may make practical sense, some aging experts are looking at downsizing from a new perspective. They’re challenging preconceived notions often associated with trading in one’s house for a smaller place.

One of the proponents of paring down is Dr. Bill Thomas, founder of ChangingAging, which explores the hidden dimensions of our humanity, and the Eden Alternative, a non-profit agency that works to improve the care provided to older adults.

For starters, Dr. Thomas takes issue with the word downsizing because it “suggests seniors are giving up something great for a future life that is smaller.” Dr. Thomas, who also serves as chief wellness officer at Holiday Retirement, sees this transition, instead, as a lightening of a load of possessions you don’t need or want and a house that takes too much out of you to clean and repair and costs too much.

Seniors are embracing downsizingAlthough many seniors may agree that the price of home ownership is too steep, on an emotional level they can’t quite bring themselves to sell the house where they raised their family. The same goes for excess possessions, including those worn-out hip waders that haven’t been used since 1998. I’’s not necessarily the boots themselves that will be missed, but the memories attached to them of Sunday afternoons spent trout fishing with friends.

Dr. Thomas doesn’t deny the power of memories. He thinks that for many people, what matters most is the opportunity to share their story and that of their family. “Although certain objects can help you tell your story, they are not the story,” he says. Dr. Thomas is an advocate of photographing treasured possessions, which “can keep the story associated with them available even if the items themselves go on to another life.”

In some cases, seniors can pass treasured possessions on to family members, but these days “many children simply do not want the mahogany credenza,” he says. “However, they would very much like to sit at a table with you with a cup of tea and go through the book of photos and hear the story of the mahogany credenza.”

Along with photographing items for posterity, another option is to keep part of a treasured item, for instance, giving away all but two cups and saucers of a 64-piece china set received as a wedding present.

Flipping the switch on emotions

Dr. Bill ThomasIn Dr. Thomas’s eyes, lightening the load can lead to pleasant feelings; still, he acknowledges that any transition can bring up a loss, and sees acts of generosity, such as donating belongings to charity, as an anecdote to these feelings. “Become a gift-giver and give away things you think other people might need and want, and the act of giving becomes the memory, rather than the gift,” he says. Another approach that can generate good feelings, says Dr. Thomas, is to create a ceremony or celebration to honor your house and its possessions as well as “the next step of your journey.”

Nevertheless, acts of generosity and a positive outlook can’t always immediately alleviate feelings of sadness that seniors may feel when they sell their house. Dr. Thomas advises seniors to be open about the emotions generated by the transition. “Don’t feel like your loss has to be concealed or camouflaged or hidden from others,” he says.

Emotions like loss or anger are often eased if families have sensitive conversations early in the game and work together to create a thoughtful plan that includes seniors in the decision making. Although caregivers can offer support in many ways, like researching senior living options or helping personalize their parents’ new apartment, they should avoid taking over the process.

“Some families make the mistake of deciding what to throw away, which takes away the choice, the freedom and the autonomy of their older relatives,” says Dr. Thomas. “At that stage, they’re not just losing their possessions; they’re losing their standing as an independent adult who can make their own decisions about how they can act and what they want to do.

As important as it is for adult children to listen to their parents’ concerns and avoid pushing them, it’s also crucial that they respond to changing circumstances. It’s far less stressful for families to create a plan before any health problems crop up―that way, they aren’t forced into making rash, sudden decisions about their parents’ living situation.

“Our culture gives the message that if everything stays the same, you are not aging and growing older,” says Dr. Thomas. “This is nonsense; of course you’re changing, and your living situation and your possessions should change as you do.” While it’s not uncommon for older adults to feel trepidation about major life changes, once they move into a senior living community many find that the personal apartments and the community living suit them very well indeed.